I’d like to say I’ve been super busy and have not had time to do sims, but I kind of… played a whole generation on Sims 4… which you can start to read here if you like. (Please do I need validation.)

I played more Mendeleevs now though so that’s cool.

When we left off, Terbium ended up moving the family maid, Alberto, into the household because he was like the only person her age she knew and I wasn’t thinking things through. Holmium: …why am I seeing my big sister throwing herself at the family maid?

Terbium: If you don’t like it, don’t come in here.

Holmium: … this is the only place in the house with food, I kind of have to come in here.

I’m gonna try not to take too many fishing pictures, guys.

Terbium: So… Alberto is… bearable.

Yeah, I feel like we can actually do a lot better. But he’s already moved into the house in all.

Terbium: … that doesn’t mean we’re stuck with him. I have the evil trait after all.

You wanna try to go the Black Widow route this generation? Holmium and Erbium were both over at a friend’s house for the night.

Holmium’s gonna get his ass dragged home by the cops.

Why did I take this picture I don’t know. Probably because the third sim just would not render so I had no idea who it was.

Terbium: Er… what are you doing here?

Terbium: I give zero shits, kid.

The cops parked, like, around the block from where Holmium was, so he had to run.

Cop: You kids need to be more active! Also there’s a pikachu somewhere around here and I am not going to lose it.

Terbium got called over for grounding duty.

Terbium: I am very disappointed in you, young man, but mostly I want to take advantage of this chance to yell at you. You shouldn’t be out after curfew. I don’t care if you got a damn pikachu out of all this. That just makes me madder because I’ve only caught some pidgeys and a rattata. I’m going to make out with my boyfriend in your bedroom.

Terbium: Good. That’s what you get for being a higher level than me on Pokemon Go.

And she did just that.

Since it was close to Holmium’s birthday and I didn’t feel like having him sneak around everywhere for two days or something, I threw the younger twins a birthday party.

The game had crashed earlier so I didn’t give them makeovers or anything. Sue me. I have no idea what their traits are and they got kicked out immediately because I was upset over the crash and we needed room for babies.

Alberto: … where, exactly, are you keeping your cell phone if you don’t have any pants on?

This maid was eating on the job and doing nothing so he got fired.

Terbium: Haha! You’re not gonna sleep with me or keep your job. Sucks to be you!

Terbium: Joke’s on you I leave poisoned sandwiches out to kill lazy maids

Why are these two always in the bathroom?

Cosmo: Hello. I don’t know where I came from but I’m here now for my birthday. It’s good to come back to Sims 3. I was growing complacent from playing a Sims game that could actually function the majority of the time.

Terbium: Ignoring that imaginary friend glitching up in the bathroom… will you marry me? Until death do us part?

Alberto: Of course! I’d love to spend the rest of my life with you!

Terbium:Yup. The rest of your life!

Apparently nothing happened between the proposal and the wedding. Probably Terbium was fishing all day. Alberto: Terbium Mendeleev, I take you as my wife, as long as we both shall live.

Terbium: Until one of us dies. Then the living party would be free to marry someone else.

Alberto: … are you alright, my love?

I thought I saw the same woman in two different places, but…

Nope. They both came to the wedding in the exact same dress. 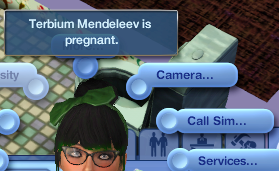 Why pay for a pregnancy test when you can attempt to go to college? In other news, we are now displaying two lovely fish that are in perfect condition. Eleven more to go.

Terbium: My legs, on the other hand, are not in perfect condition. Someone call an ambulance.

As torch holder, Terbium also has to be the one to fix everything in the household.

Maid: Please. I’ve been mopping the same spot for hours. *cries, creating an even larger puddle* … there are some things that can’t be fixed, though.

Death: YOU’RE A FAIRY. YOUR LIFESPAN IS LIKE FIVE TIMES LONGER THAN A HUMAN SIM’S.

Arnold: … but I always got caked at the same time that my wife aged up.

Good-bye, Arnold. You will be missed.

Terbium: I was going to go mourn grandpa but then I had to stop and change clothes.

Okay, time for mourning Arnold is over! 😀

Also reminder to check out my Sims 4 legacy if you’re interested.