Welcome back to the Mendeleev ISBI. This is our ‘Christmas’ post, although I obviously couldn’t control my sims so it’s as ‘Christmassy’ as they’d let me make it. We have prom coming up as well, so yay for that.

It was the day before Christmas,
And all through the house…Caesium was making inappropriate forum posts on another sim’s computer, and I decided not to make this rhyme. : /

Antimony: Whoo! I yelled at my son for no reason again!

Seriously Lanthanum what are you doing that’s so wrong? 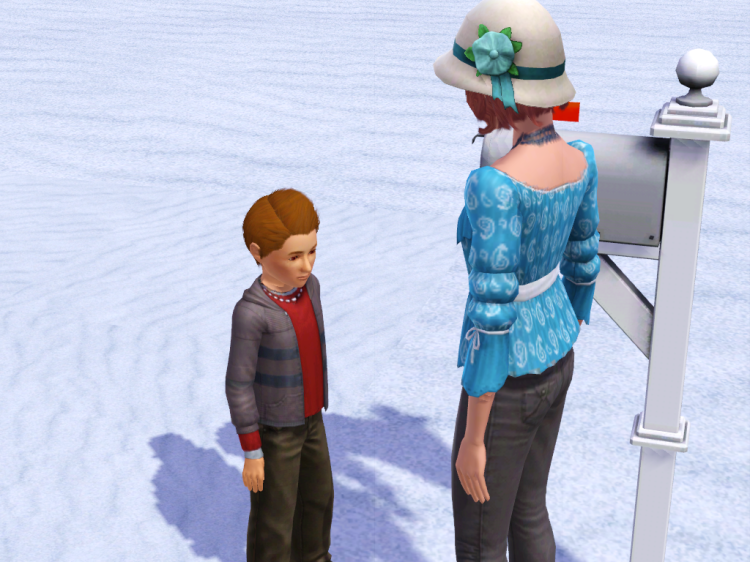 Dym lost his computer privileges though, because he’s got a D in school. Looks like a lot of the Mendeleev kids will be on Santa’s ‘naughty’ list. Ho ho ho.

Katja: Lucille, we need to discuss how you dress. I think it’s affecting poor little Raz.

Viola: Just counting down the days until I can move out.

Antimony: This is by far the most disgusting haunting I’ve been to yet.

Clothes: Iiiii am the ghooooost of Laundry Paaaaast. I will show you what happened to your sooooockssss…

Toilet: I am the ghost of Shitting Paaaaa–

Antimony wet herself while exorcising Mulan’s house, because Mulan decided to scare her on the job and I retaliated by stealing her toilet and sink. FAIL, but worth it. Do you wanna build a snowman?

Cerium: It’s… not actually winter. You don’t have Seasons. We can’t build snowmen.

But… we can pretend we built this one!

The Secksies had a decorative pet pig and no one had to be a party pooper about it! *pout*

Cerium: His hat’s not on straight; I would never make a snowman like that. Even if snow weren’t horrible evil water. 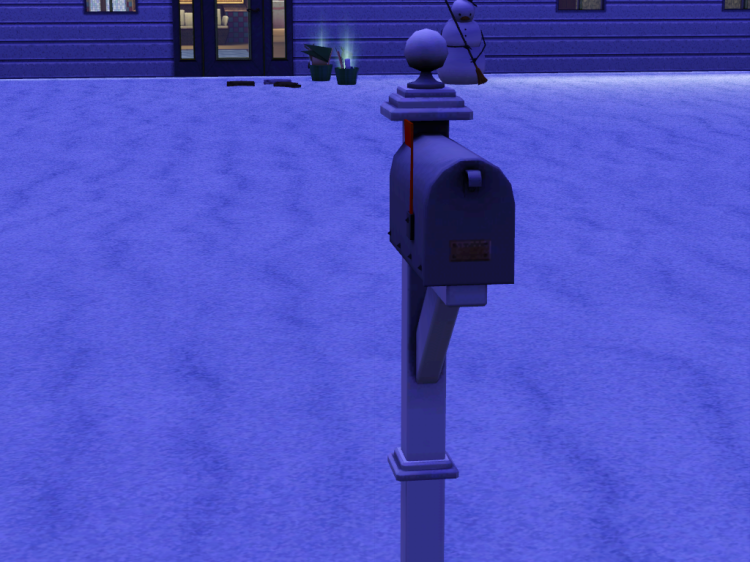 Everyone made a letter to Santa, though. You can’t tell me otherwise!

Antimony: Cerium, you know Santa can’t bring us a pony.

Agatha: The police are outside the house and there’s a girl sleeping on the porch. What is my life.

Cop: CAESIUM MENDELEEV. COME OUT WITH YOUR HANDS UP.

Viola: My family is crazy. Take me with you. o_o

I doubt the Mendeleevs will be any better. : / Silver: How dare you! What is this, the third time in a row?

I had Antimony let her off the hook because she needs to go to school and things like that. And prom is coming up; I don’t want any of the kids missing prom.

Yo, it’s the fairy Lynda Kahn and her son, Arnold.

Barium went over to their house. Possibly to bury the hatchet.

Part of me wants to marry someone in from this family at some point. Like a marriage alliance to unite the warring families. Mostly because Ferby from the Pokemon Legacy was pretty much the most adorable thing ever.

Why did I take a picture of Antimony eating sushi?

The world may never know.

More ghosts coming from this house. There are only so many families in town right now (I think) so we go to a lot of the same houses.

Antimony: I heard you’re going to marry one of my sons?

:O Antimony! Ignore the spouse material brushing you off and come see this ghost!

Antimony: OMIGOD HE MUST BE A LONG LOST RELATIVE. We bought a laundromat because we had the money and why not. I’m not sure what I’m going to do with it, just yet. For now we just got another washer and dryer to upgrade it to a three star establishment, which is apparently the limit for this sort of thing.

And Caesium’s sleeping in the bathroom.

She never fails to disappoint, does she?

It’s the morning of prom and I just got an alert saying that the twins are going to be teens ‘soon,’ so I decided to speed things up ’cause I wanted them to be able to go to prom for sure.

Cerium: I feel a sudden affinity for baking and other kitchen-related tasks. Dym: I feel a sudden desire to be in a cubicle. : I

He’s… eh. It’d have been nice if he’d been a workaholic when he was FAILING ELEMENTARY SCHOOL.

I got a notification saying that Cerium witnessed a shoot-out or something, which freaked me right the fudge out, until I saw she was playing with the virtual reality goggles.

And then I guess nothing happened until prom.

Cerium’s hitting it off with the Kahn boy.

Antimony: OVER MY DEAD BODY.

Two houses, both alike in dignity…

Barium is hitting it off with Wren, who was another scary eyebrow girl a while back. Wouldn’t be opposed to him having kids with her, either, if he’s heir. LET THE EYEBROWS LIVE ON!

Lanthanum was prom king! But he got in trouble for suggesting a prank in front of the chaperones.

Lanthanum: Prank? I was serious about filling the school with horses! It’d be a much better atmosphere! 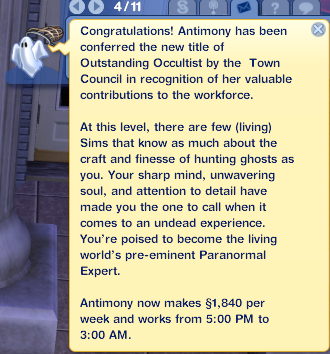 And Antimony is one promotion away from reaching her LTW! I doubt we can make it in what time we have left, but I can dream. Although it really depends on who is voted heir, I guess.

I’m not sure if I mentioned it or took a picture, but I made Cerium’s bedroom completely symmetrical.

Cerium: As it should be… zzz…

And then… Santa came. Or something. I’m not gonna lie, I was expecting Silver to keel over and I was going to dress my simself in a Santa-esque outfit and have her bring the graves. But that didn’t happen so I had to get actual gifts for the kids, at least.

Barium got a bunch of greenery for his room.

Barium: They’ll help to convert some of the carbon dioxide I create into oxygen! 😀

Lanthanum: That statue’s been there. : /

Hush, you. You got a rocking horse at least. 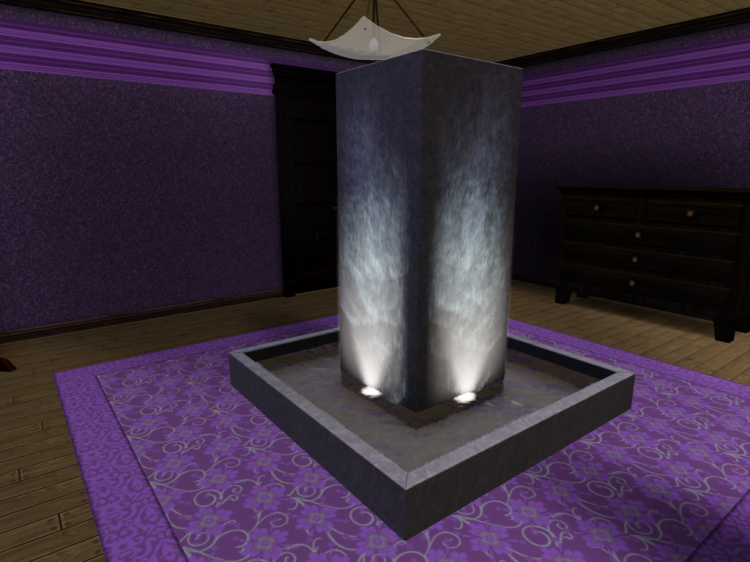 Cerium got this thing because it was symmetrical, but I didn’t realize it was a fountain. I mean, I did, but I didn’t connect it to her being hydrophobic.

Cerium: I can never go in my room again. o_o

I’ll swap it for something cooking related I guess when I open the game again. : /

Dym already has a killer pet and a chainsaw, so he got a cannon because evil.

You’ll get what you get and you won’t get upset.

Caesium got a magic mirror. Maybe it will compliment her and her enormous ego.

I had Dym invite Trinity over with his teen action, since she was the only one of the new romantic interests whom I haven’t seen yet.

Antione: Good, matching outfit. Now, let’s just see what you have in your pocket…

Trinity: Mr. Mendeleev, I’ll call the police if you don’t take a step back. : /

They sure as hell know where we live with all the times that Caesium gets escorted back home.

Aw, and her face is even interesting. She’s definitely not a face one. I think. I’m real bad at faces guys. : /

Unfortunately, that seems to be a career outfit or something, so I couldn’t change her hair to something more flattering or anything like that.

Trinity: Bye, off to wizarding school!

And… that’s all I have! But before we go, I have a Christmas gift for all of YOU! 😀

Caesium is the only child in the generation with teal hair. She has delusions of grandeur, but she’s only really famous among the local cops who have to escort her home every night. For whatever reason, she hasn’t found any romantic interests yet, although her Imaginary Friend/Paparazzi, Bobo or Peanut or whatever, might be a contender if she were to be our next torch holder.

Lanthanum loves horses, although he doesn’t have that trait… or that expansion pack. : / His actual traits are a bit eh, but he’s got character whether or not his official traits say he does or not. He’s not seeing anyone but some girls in town have made it clear that they’re interested through heart-farts.

Cerium Mendeleev enjoys symmetry and cooking… as long as water isn’t involved. She’s also a PARTY POOPER who won’t build a snowman with me…

Cerium: My picture is already off-center, can you at least do the commentary right?

Ahem. Cerium has a romantic interest in Arnold Kahn, a boy whose mother is nemeses with Antimony. So she’s got the ‘uniting our families before this grows into a blood feud’ thing going for her.

Didn’t seem to realize that taking a bath would subject him to the horrors of water.

Stop crying so I can snap a picture, Dym.

Praseodymium is the last of the kids to be born, and our halfway point, so he’s a pretty big deal already. He’s been failing school, but his new workaholic trait might change that in the future, and most of his evil schemes involve terminating the existence of water. He’s currently seeing a girl named Trinity, about whom little is known, but her clothing matches, at least.