So, I’m, like… all caught up on homework, basically. Things are still due, but nothing pressing, which is a huge relief. So time for some Mendeleevs, amirite? That’s… that’s a stank-ass toilet. I need to get Silver on that ASAP.

Well, not on that. That would be… ew. But cleaning it.

Quan is sleeping and dreaming of frying pans. Moving on. Silver is still in that feathery outfit, and eating strawberry ice cream with *gasp* SPRINKLES.

You cannot put too many sprinkles on a dessert. Not physically possible. 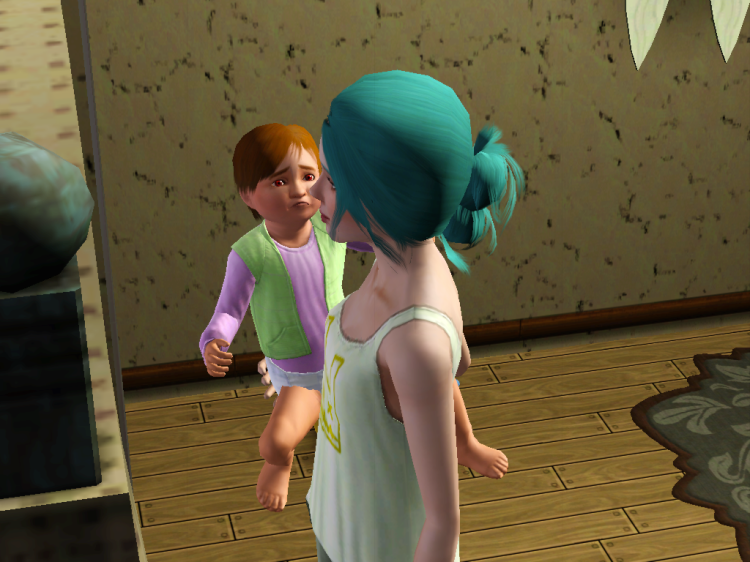 Tin cares for little Iodine, who will probably grow up to be a disappointment to spite me for putting so many expectations on that little not-teal head of his. Xenon plays with an IF. He’s bald and teal. And has pink boots. That’s all I have to say on the matter.

Silver learned how to play Medieval music. I think that’s what this picture is, at least. Oddly, she plays this music beautifully, but if I tell her to play the other style of music it still sounds like screeching.

Antimony makes a habit of going to her sister’s boyfriend’s house and sleeping on his back porch. Weirdo. Evidently, he doesn’t take too kindly to this. Silver wanted to teach Tin to drive, so they went out in the car and ended up in the alchemy shop. No idea what she’s reading.

Quan: I took a bath today. It was wonderful.

Quan, if Antimony passes out, so help me…

She made it to the bed though. Apparently.

We somehow got two new gnomes. I think their names are Ellie and Culta from the Cult of Personality. But I honestly can’t remember. : /

Werewolf ghost and Palli’s evil glow. That’s why I took this picture, but I have no idea what I was planning to say about it. Teenaged Boy: Well, it’s getting late, time for me to go.

Wait, it’s… morning? He came home with one of the girls and spent the whole night here? WHO EVEN IS THIS GUY??

Palladium: As I was saying, inflicting pain is an art form…

We get it, Palli. You’re evil.

The weekend came, so I sent the family out to the beach with a picnic blanket. Well, I sent Silver out with everyone else following her. 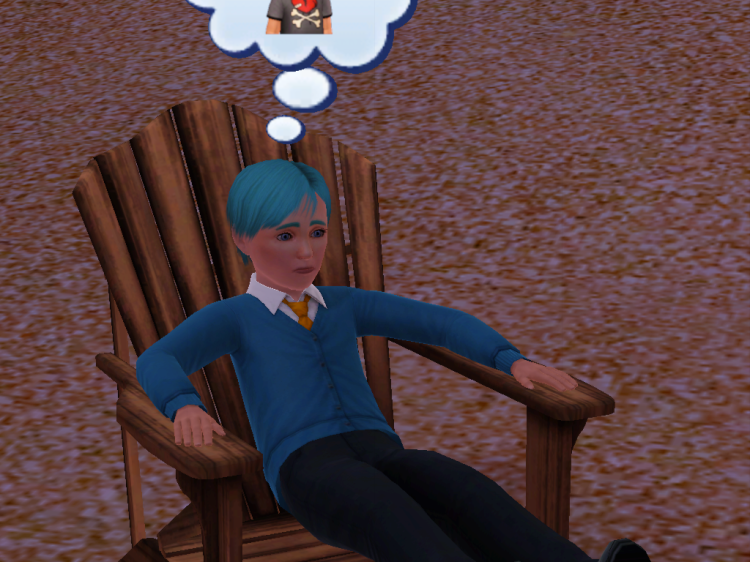 Tellurium was not impressed by the ocean.

Tellurium: What, get my beautiful hair wet and dirty? Never.

Your hair would be more beautiful if it weren’t teal.

I’m not counting toddlers falling asleep on beach blankets as a fail because OMIGOD LOOK AT THE ADORABLE HE’S SLEEPING ON A BEACH BLANKET.

May or may not have directed Xenon to the second blanket to complete the cute.

Palladium: There’s a chair right behind you, Mom. Calm down.

This also became adorable as soon as Palladium took a chill pill.

I directed none of this. Maybe Silver, but everyone else came on their own to be adorable. The problem was getting everyone to get home, since I could only direct Silver to pick up one of the toddlers. She ended up taking Iodine home, putting him to bed, and then coming all the way back to get Xenon.

Palladium: Hey, I was just about to get him. Antimony took up martial arts because she’s disciplined or something.

Silver’s violin practice is not going as planned.

Silver: It’s stuck. Why is it stuck?

I can’t even begin to tell which is which, so no quirky little script bit with them arguing or whatever. Silver: What do you mean? I’m holding a baby!

She’s just bent out of shape because SPOILER ALERT there are no toddlers in the house by the end of this post. Sometimes I really wish I could control them and enforce the ‘you burnt it, you eat it’ policy that I have with my sims. Tellurium is also having a birthday.

I’m sorry no one’s paying attention, baby. : ( It’s hard to keep track of birthdays when I only go into the kids’ control panel things once in a blue moon.

He’s a cutie. His new trait is good sense of humor. Not that you can tell from his face.

Don’t know who did this, but I heard the ‘fail’ music and found a puddle, so I’ll just count it as a fail to be on the safe side. : /

I then realized that Iodine hadn’t gone to bed because he had no bed. So I made a room for him and Xenon. I don’t know why I got the urge to decorate it like this. : /

Xenon’s birthday was the next morning. I wanted him to be a child before the heir poll to make the voting a bit fairer.

Palladium took him to the cake and I discovered they’re best friends. Even though last time I checked he didn’t like her because she always stole his candy. : /

Palladium: You don’t have to be nice to them until they’re an age where they’ll remember it. First up is Tin: a ‘genius’ coward who runs TOWARD ghosts. She saves time and money by eating rotting leftovers straight off the plate and putting off laundry until the clothes themselves become sentient and walk to the washer.

Second is Antimony: a kleptomaniac who wants nothing more than to steal the heart from that special someone. She is both eccentric and disciplined, and currently leaning towards ‘Doc Brown’ or ‘Jackie Chan’ as career paths. Tellurium is friendly, but don’t say anything bad about him or his artsy-fartsy leanings, since he’s a snob. Unless you tell a particularly funny joke about his ugly-ass paintings (and they will be ugly, since he’s never touched a brush in his life).

Iodine is a genius, and hopefully he’ll show this trait better than his sister has. He’s also the second kleptomaniac in the family, but he’ll probably feel super bad whenever he steals something.

Our youngest, Xenon, is yet another kleptomaniac in the family. And when the cops come, he’ll probably sleep right through the sirens. On the other hand, he’s got such an active imagination that the cops might be all in his head… And I’ll leave you with Xenon, warrior princess.

3 thoughts on “Thick as Thieves”