So… the Internet sucks in the dorms right now. I lose connection pretty frequently, especially when trying to upload pictures. But I battle through these frustrations for YOU, dear reader! Yes, YOU! You specifically, you one, particular reader who is currently reading this sentence. Not anyone else.

Quan is being super frugal all up in this legacy.

Apparently the little candle on the table is operated by the clapper.

Silver is painting and the canvas is… er… jamming through the walls. Oops?

TIN IS SLEEPING. SHE IS ACTUALLY SLEEPING!

Antimony: Do you mind? And by that point, Quan’s moved to the nursery to put Tellurium to bed. So cute. 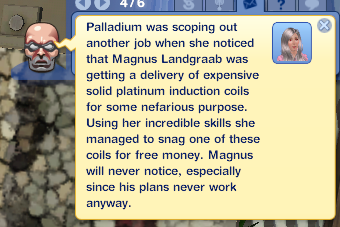 And Palladium was at work. Stealing platinum induction coils from her underlings.

Palladium: Even if he did notice, I’d feed him to my laser-toting sharks. Loser.

Antimony: You haven’t made a room for me yet.

Oh. Sorry about that. 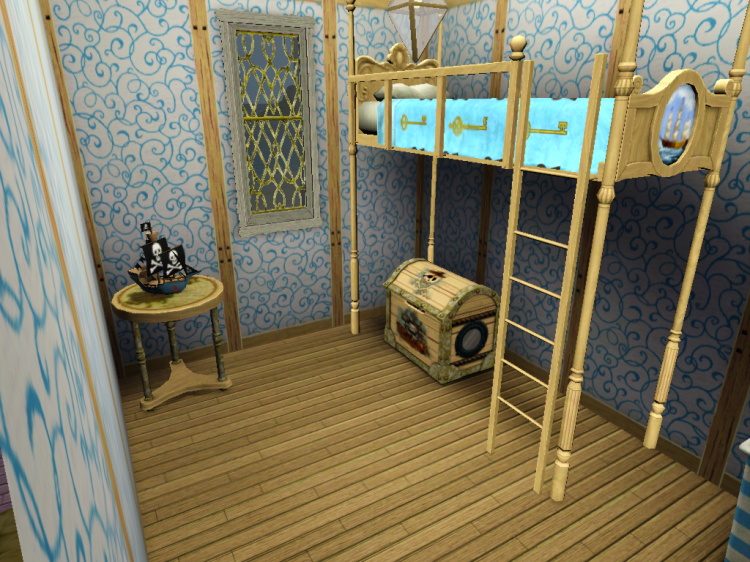 Kleptomaniac screamed ‘pirates’ to me. Because pirates steal things, I guess. And also, come on. Pirates!

Tellurium takes a field trip down to the playhouse. That’s the only real problem with the setup I have right now: the toddlers can play with some of the toys, but we need an adult to actually pick them up and bring them there first.

I haven’t really seen any updates on Silver’s brothers, but apparently Indium got married to Rita Davis when I wasn’t looking. Good for him.

Silver wanted to put her baby on a bouncy ride, and it was adorable. This is pretty much my favorite lot ever; it’s so pretty. It’s just too bad that I had to screw up the terrain in order to build the house. : / I believe Tin got invited to someone’s house and decided to play boat outside? Ah, yes, she did. Because when I checked up on her again, she was indoors. And wearing pajamas, for some erason.

Kid’s Mom: You know what really grinds my gears? Bookcases. I hate them!

Tin: Then don’t fill your house with them, lady! You have, like, seven that I’ve counted. Don’t blame your poor life choices on me!

Kid: Mom, have you been drinking again?

Tin went home after that. I was hoping she’d be home and in bed before the effects of the full moon began, but we had no such luck.

Tin: This seems like a good place to be. Anyone want to read me a bedtime story?

Zombie: Grarrrg! Your lot is so pretty!

Antimony: Could you please keep it down? I’m doing times tables. If there were a ‘devoured by zombies’ death in Sims 3, these girls would both be extremely dead. Tin: Oops. The ghost disappeared before he could read me a story! Guess I didn’t get any sleep at all last night!

This shot is here because PRETTYYYYYYY.

And also because someone kicked over Edamame.

For some reason, Tin cancelled her ‘go to school’ interaction and came back home.

Silver: I’m supposed to be scolding you for skipping school, but WHY didn’t you go to sleep last night, young lady? *angels sing from above*

She’s not actually sleeping, just napping, but SHE’S NOT FAILING, EITHER!

And then Tin decides to sleep in the treehouse we got. Actual sleep. Then Silver goes into labor.

It’s your own fault, kid. If you’d gone to bed, you could have been at school right now!

And Palladium does not bat an eye at her daughter going into labor in the corner.

Palladium: Just don’t get any labor juice on my shoes, dear.

This one’s Iodine. He’s friendly and artistic, probably because the first thing he saw upon entering the world was an easel.

Palli’s much more impressed with her granddaughter. 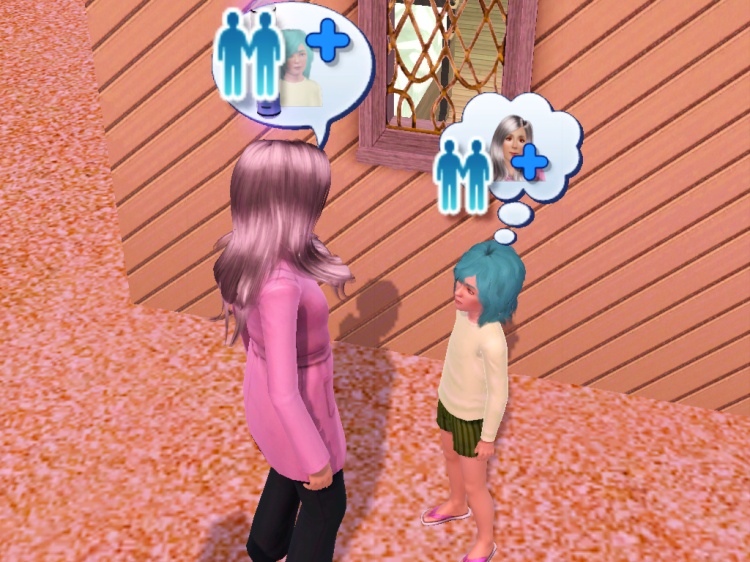 Palladium: Good job racking up fails, kid. We need to show everyone this legacy went down the tubes when I stopped being the torch-holder.

Tin: I don’t know what you’re talking about, but if it means I can keep alternating between fainting and begging for bedtime stories, I’m happy.

Why do you think I’m singing?

Tin: I am now displeased that we spent money on this wardrobe. : /

Palladium: Ha ha! You have the genius trait but your AI is stupid!

Tin: What the frack, Grandma? I thought we were friends!

Oddly enough, they’re still friends even though it seems like Palladium is constantly mocking Tin.

In other news, NO SKILL BAR.

OPPOSITE OF WOMP WOMP.

Now to have more babies in hopes of getting non-teal kids.

Silver and Quan: *making out loudly*

I CAUGHT YOU RED-HANDED.

They don’t get changed when they’re woohooing! I heard the little clothes-changey whooshes before they started! LIARS! And this is because I forgot that Silver had that as her athletic wear. And I’m now realizing that Quan’s wearing shoes in this, so it must be his own athletic wear that I’ve never seen ever. It’s about as hideous as you would expect a randomly-generated outfit to be.

And the lullaby FINALLY happened on the third try! Baby… *checks chart* Xenon is on the way. Crossing fingers for girl so she can be Xenon Warrior Princess.

4 thoughts on “Death By Zombles”