Welcome back to the Mendeleev ISBI, where…

Um… Houston? We have a problem.

Don’t you want to see what happens? Where’s your scientific curiosity?

Yttrium: Stop nit-picking and SAVE ME.

*sigh* *sends her to hospital* 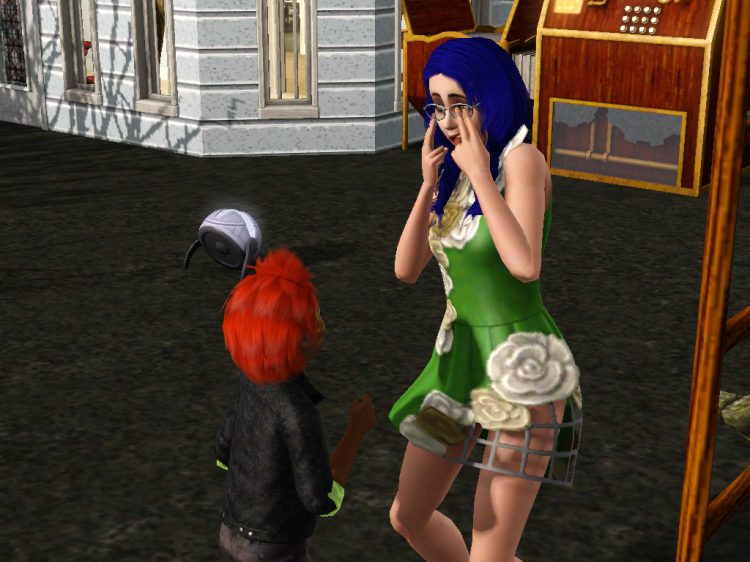 Nah, here she is! Safe and sound, playing with Vaughn. Then she made a teddy bear.

Mr. Bear: You’re new in town. Prepare to be abandoned and unloved. No one plays with us.

Vaughn: Anyway, Tricia doesn’t even know. Class president is a joke title. She’s just a figurehead for the teacher, you know?

You may have noticed that Yttrium had the wish to woohoo her husband. She’s had that for a while now. So of course Nervous decides to stay late after work (he was ALREADY working late that day, too) and read a book in his graduation robes.

Palladium: Hey, you’re that lady I see around sometimes. : /

Yttrium: Who’s a cute baby? You are! YOU won’t brush me off for work! 😀 Technetium: I’ll just ignore the bubbling family tension and work on painting. Maybe when I’m an adult I can be a troubled artist and sell my work.

Get robo maids, guys. They teach skills to toddlers. Although I think this means that Rhodium’s gonna grow up bilingual in English and binary. Or English and R2-D2.

Yttrium: Quick, my love! To the shower!

Yttrium: I am displeased.

So when a guy Yttrium had found attractive before calls her out on a date, I may have clicked the ‘yes’ button for her…

Yttrium: OFF the phone. I am not gonna be ignored by you too. : / Just a quick fling and then when Nervous comes home she can fulfill that want. EASY PEASY.

Vaughn: So have you noticed that the ghosts aren’t coming out? Probably ’cause you’re ugly. I underestimated the reputation system. And the fact that Yttrium’s a celebrity for some reason. : /

Nervous: How could you! D8

Yttrium: I was weak! I needed a man who doesn’t wear his graduation robes everywhere! D8

… eh, why not? Not like this can get messed up any more. And it’s not like Nervous wasn’t dating two sisters at once before… I mean, he would have been if he’d actually showed up those times.

Yttrium: Okay, I got alcohol in my system, so nerves aren’t gonna stop me from kissing you and rekindling our love.

Nervous: I’m just gonna route fail until I have to go to work.

Zirconium: … this date turned out way different than I imagined, and in all the right ways. *wishes for popcorn*

And then it was Yttrium’s birthday, which I forgot.

Yttrium: Happy birthday to me, pole! You’re my only friend.

Yttrium: I grew out my hair, to look more mature.

Yttrium: Look, mommy got a makeover.

Palladium: Woman, I see you little enough as it is. Now you confound me with disguises?

Technetium: I know, right? I should probably care more about my hungry sister, but this llama-petting app is way more important. I didn’t know that Emily did holograms!

On a completely unrelated note, did you know you can just go up to plumbots in the future and steal their personality chips for your own selfish needs? Tried to find a picture where the yogurt has to tell the body where poop goes and there are arrows and stuff. Instead I found this pic from a Japanese commercial.

I needed to share it. It compelled me with its dark will.

Nervous: Trying to swim until I die is exhausting. I think I’m gonna go to bed. : / 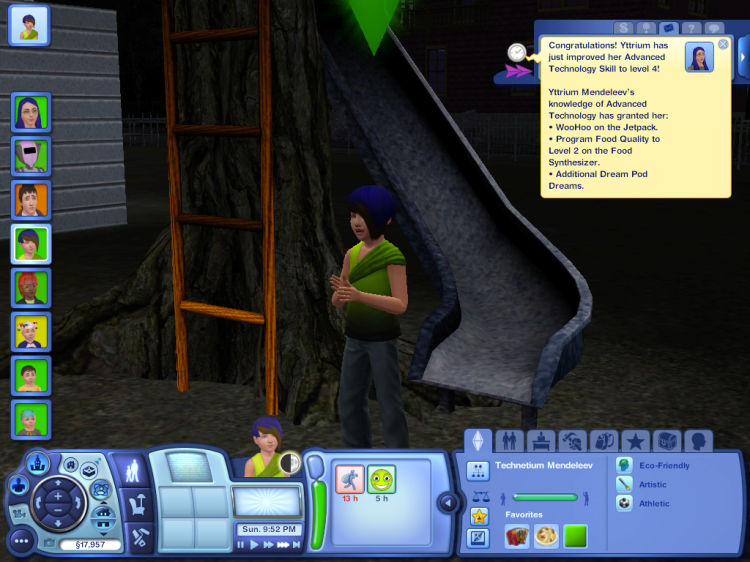 GUYS. Did you know you could woohoo in a jetpack? I did not.

Technetium: Why did you have to be on me for that announcement? D:

Because it’s your birthday.

As full of beauty as she is empty of common sense. It is, like, 2 AM, you have school tomorrow, and you DON’T EVEN HAVE THE ATHLETIC TRAIT.

Technetium: Yes I do. I just got that trait.

Oh… my other points still stand.

Along with points that still stand, remember how I said Emily is scary and possibly evil? LOOK AT THE TOY SHE MADE.

Disregard Yttrium being pummeled by her spouse. Yeah… apparently Nervous is done putting up with Yttrium’s crap.

I love how neutral their faces are afterwards. : /

Nervous won, by the way. Then he has another date with Zirconium.

Yttrium deals with her midlife crisis/loss of husband (I had them break up since he kind of beat her up) by kissing the robot.

By that I mean that I found the ‘romantic’ actions with Emily and thought that human love would stop her from trying to kill all biological lifeforms.

She didn’t like it, and the next thing I know Yttrium tries to turn off Emily.

EMILY ZAPS THE HELL OUT OF HER.

SOMEONE FORGOT THE LAWS OF ROBOTICS MAKING THESE THINGS. SIMANITY IS DOOMED.

Lots of fails next time, though. 😉 And I remember that I promised to take the family on outings; we’ll do that once the toddlers can walk and actually do things.

One thought on “The Plumbot Uprising”