‘Ello, everyone! It’s been… a week since the last post, about. I thought it was a lot longer than that, but I guess time flies in college. Especially when your effectively-four-day-weekend is suddenly shortened because you’re observing a classroom on Mondays and Fridays…

Krypton wanted another baby, so I humored him. I will come to regret that decision. That is not an ‘I’ve played ahead’ prediction-that’s-not-a-prediction, this is an actual prediction. I think that four-five kids in a generation is about my limit before I start pulling my hair out and questioning my poor judgment. Usually the youngest kids annoy me and I wish they’d just crawl back into their mother again. : / Laurel: I think you already did that joke. And it’s still not funny.

I can’t install Pets; I gotta get my dog-love in somehow. : / Mina: *snicker* Look at her nose.

Um, you’re one to talk. Someone take a chainsaw to those nails or something; if she plays tag, whoever she tags when she’s ‘it’ is gonna bleed out on the playground! Rubidium has more important things to deal with than her rude friend. Namely, her mother, who likely spent all day painting rather than caring for the twins. If she actually did her job as mother, I think I would have gotten some pictures again.

Rubidium: You spend so much time on that easel that you’re not even friends with any of your kids!

Laurel: I never! I need to calm my nerves with painting…

Except the easel is the kids’ favorite place to play with IFs, apparently.

Come to think of it, I’m pretty sure the reason why my non-THs are so productive is that there’s nothing else to do in the house at this point other than skill really. Thanks kid, we really needed that.

Laurel: I think something might be wrong with my daughter. Since Rubidium had no friends, not a single one, I sent Krypton to hang out with her. Talk to his daughter and all that.

She responds by biting his head off.

Rubidium: You leave us alone to be ignored by mom while you’re at work, so don’t pretend you’re any better! 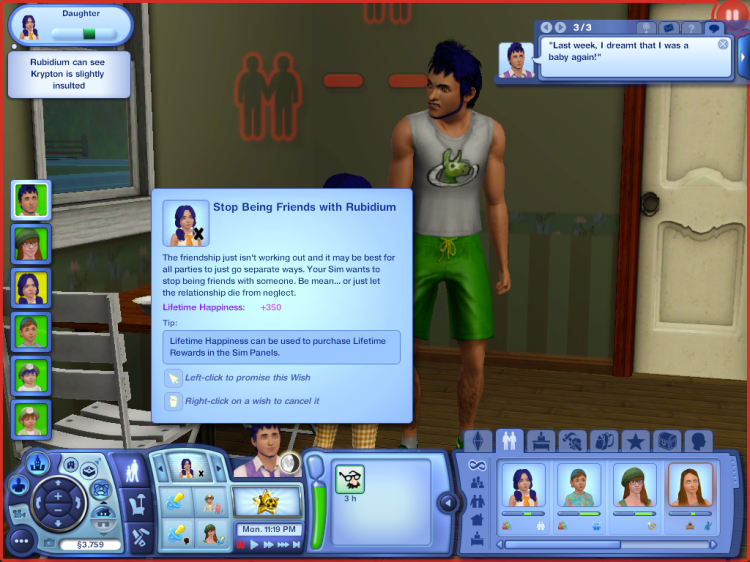 Krypton rolled the want to stop being friends with his own daughter.

Krypton: I can’t help that she’s got a stick up her ass!

The pop-up in the corner is the secret he told her… maybe that’s what set her off.

Rubidium: Don’t tell me, Dad, go get a therapist… and sign me up for a session too. : (

Krypton: You know what? It’s late, and a school night. You’re probably grumpy because you’re tired. Why don’t you go to bed.

Rubidium: Why don’t you EXPLETIVES DELETED. Bitten by a radioactive puke stain, she is… She goes to work for a bit and promptly gets kicked out when she pops.

Apparently sim pregnancy is super intense, and you have to take leave as soon as you start showing. But you can still spend all day fishing or running around town collecting bugs and rocks.

Laurel: It’s an insurance thing. They don’t want to be liable. The office doesn’t care what I do with this baby in me when I’m not under their watch.

I’m usually pretty lax in my skilling of the toddlers, and this is even moreso for ISBIs. I’m sure it’ll (maybe) be different if I get a stay-at-home TH though. Possibly.

Rubidum: What’s this? Mother actually taking care of the toddlers? I approve. But I could still do better.

You’re still just a kid, so you can’t do anything when they’re in their cribs. Or change diapers. Congratulations! Your RUBIDIUM has evolved into TEEN RUBIDIUM!

She gained the trait ‘loves the outdoors’.

Which apparently translates into ‘fairy child’ in my mind. But a grumpy fairy child. With no friends. 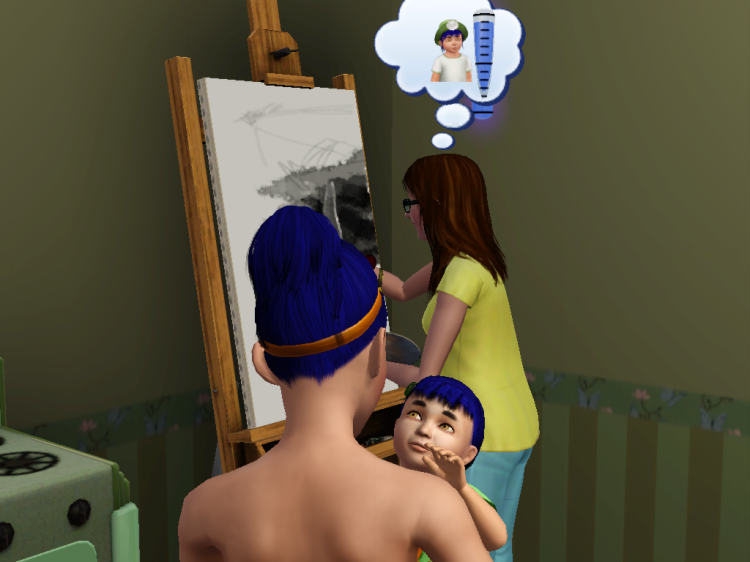 Laurel: Cool, now I don’t even have to actually take care of the kids! Krypton rekindles his marriage with his wife by challenging her to a chess match.

Probably could’ve chosen some better ways, but whatever.

Now let’s play the game where we see how much my sims actually use the toilet without washing their hands. Rubidium and Krypton try to be friends again with MOAR CHESS.

Rubidium: You know, you should have a sculpture instead of a painting. It’s more interesting.

Krypton: I’d be really happy with a sculpture of myself, actually.

Not gonna happen in an ISBI, though. 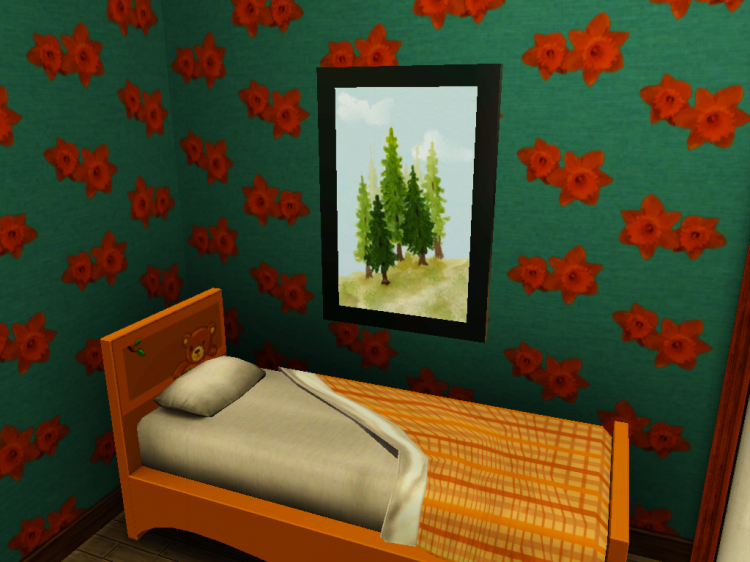 I like to think that Laurel paid attention to her daughter’s new trait and made this painting as a peace offering. Lucky: AND WHAT ABOUT ME.

Lucky: I get NO face time.

You’re the imaginary friend of a sim I can’t control.

Lucky: Listen, missy. You better be voted heir so I can become real and we can get married.

Lucky: You’re right, I can probably do better than you.

Krypton has a birthday. I don’t really care, except it means that Laurel’s closer to her birthday, which means i can order her to paint a portrait.

I CAUGHT YOU RED HANDED MISSY.

Laurel: You’ve blamed your imaginary friend too long for your misdeeds!

Laurel: One, we’re not friends. I have a sliver of relationship in my bar. Two… why is this the ONE time you’re not looking at your easel?

Well, as you can probably guess, Rubidium still has NO friends, so I send Krypton to help her with her homework, which will hopefully raise relationship? Two birds, one stone. Maybe.

Krypton: Yeah, I’m tired too. Finish this tomorrow before school?

Rubidium: Not a chance. ME TOO WHY DID I AGREE FOR MORE KIDS??? I have no right to sound annoyed because I’m pretty sure I gave Krypton the fertility treatment?

We got a girl named Niobium (virtuoso and heavy sleeper) and a boy named Molybdenum (excitable and loves the outdoors).

Lucky: Yeah! Listen to your mother!

Yeah, I actually have no idea what’s happening in this picture. Oh, and the other twins grew up into children. Zirconium is insane, hot-headed, and athletic. I’m sure she’ll have just as many friends as Rubidium has with her grumpy trait. Yttrium (gotta remember it’s Yttrium and not Ytterbium : P) is a clumsy excitable coward. Great traits if she gets in a horror movie, she’ll be the one running screaming from the monster until she trips on her own two feet and faints. I leave you with Zirconium being told a scary story in the middle of the night. The night before her first day of school.